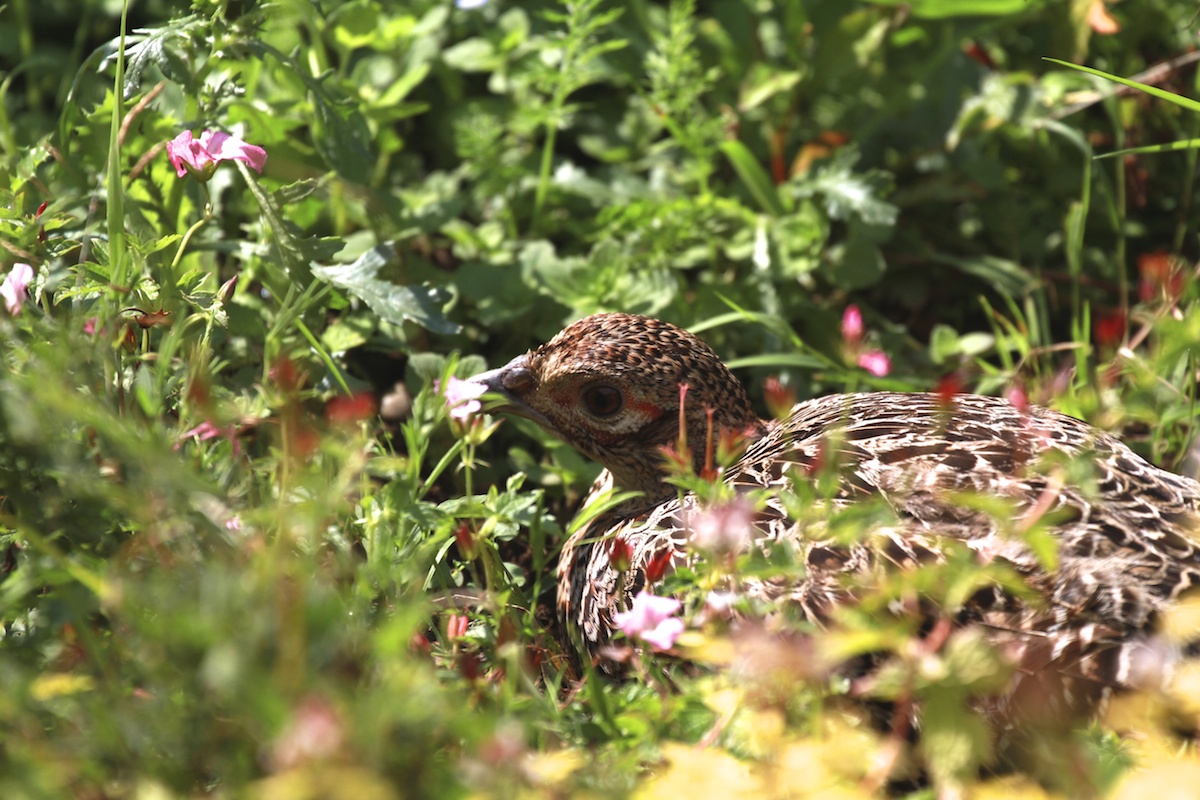 “Buy flowers – or if you are poor, steal one from someone’s garden; the world owes you that much at least: blossom – and put them at the end of the bed. When you wake, look at it, and tell yourself you are the kind of person who wakes up and sees flowers. This stops your first thought being, “I fear today. Today is the day maybe I cannot survive any more,” which I know is what you would otherwise think. Thinking about blossom before you think about terror is what girls must always do, in the Bad Years.”  Caitlin Moran

She’s only a girl herself. A slip of a thing. The young hen pheasant that lives in our patch. A young mother with one precious offspring.

They are so well camouflaged that I almost stepped on the chick when I was gathering up some herbs for a frittata. (Italian omelette don’t you know. ) There they were curled up in the oregano and the fennel, crouched so low that they blended with the garden soil.

She’s not canny enough to flee. She walks away from me and my camera and the chick, so light and flimsy, sort of cycles in mid air.

She maybe young and lacking in the skill of alarm raising. But she protects and teaches the chick as well as any mother. She makes sure that the chick is heading in the direction of tree cover and then she gives me one final glance over her shoulder.

Do we trust each other? To share each other’s mutual space? I think so.

Later I was listening to Caitlin Moran. I’ve heard it before, but every time it’s like new. Flowers might be one way to ease up on ourselves. To lessen expectations. To open to possibilities.

I’m studying flowers in intense detail. Each petal seems to say, I am enough. I can’t even choose between the wild daisies and the cultivates irises. And I see, close up, how it doesn’t even matter.

Later my pheasant girl re-appears on the lane. I am trying to drive out the gate. The chick hangs out in a leisurely stroll. Again the mother tries to lead her to safety, jumping up on the stone wall. I wait.

As Caitlin says, sometimes we have to mother ourselves. We have to learn how to think about blossom before any other thought.  In the Bad Years, and any time.