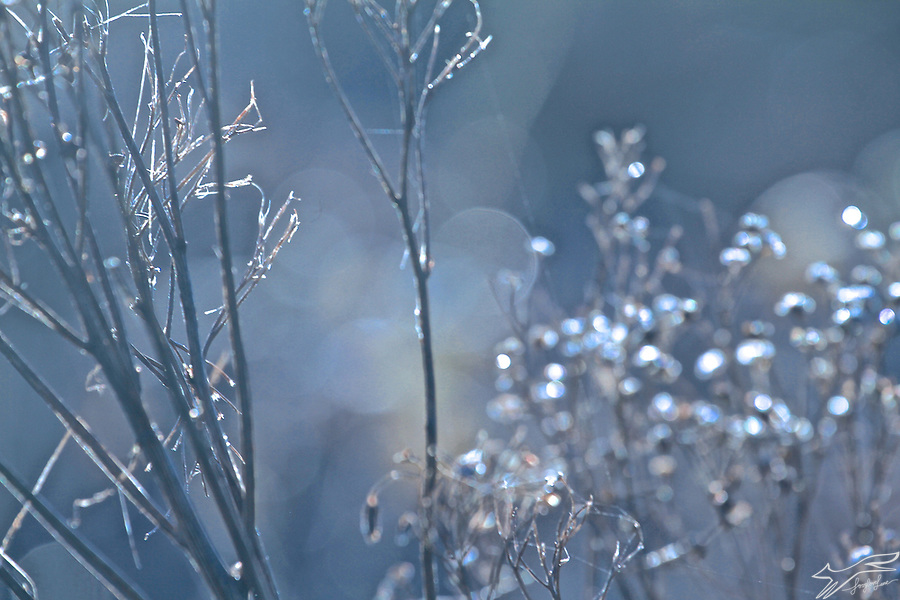 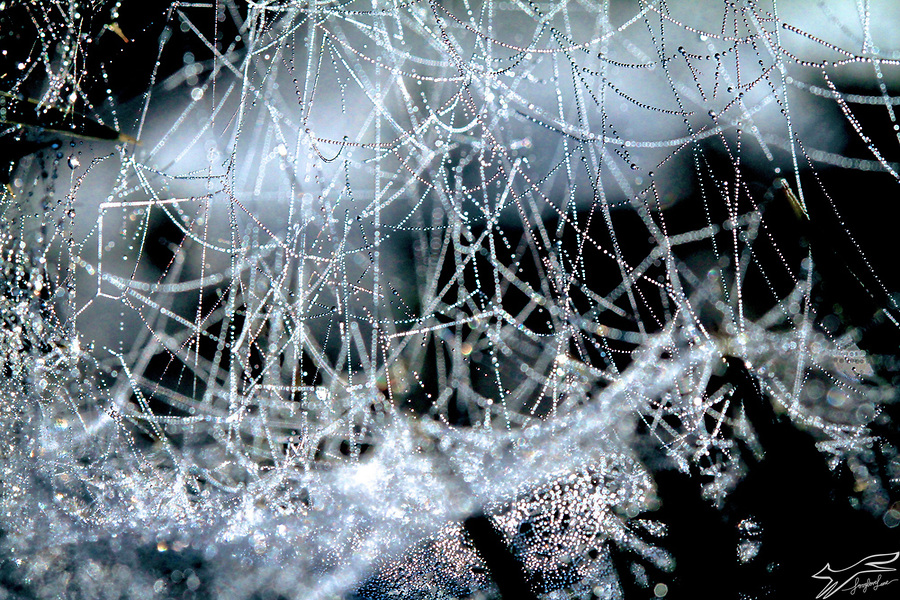 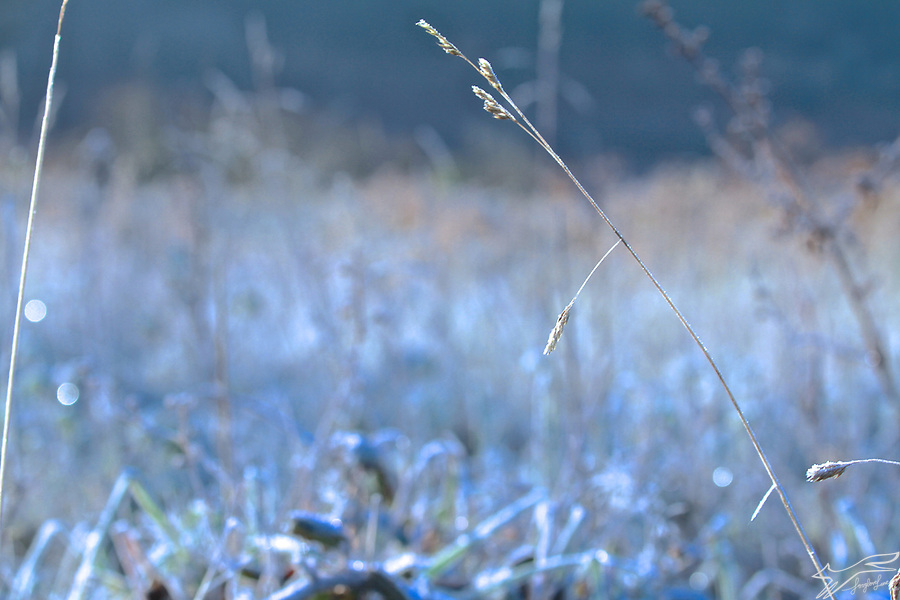 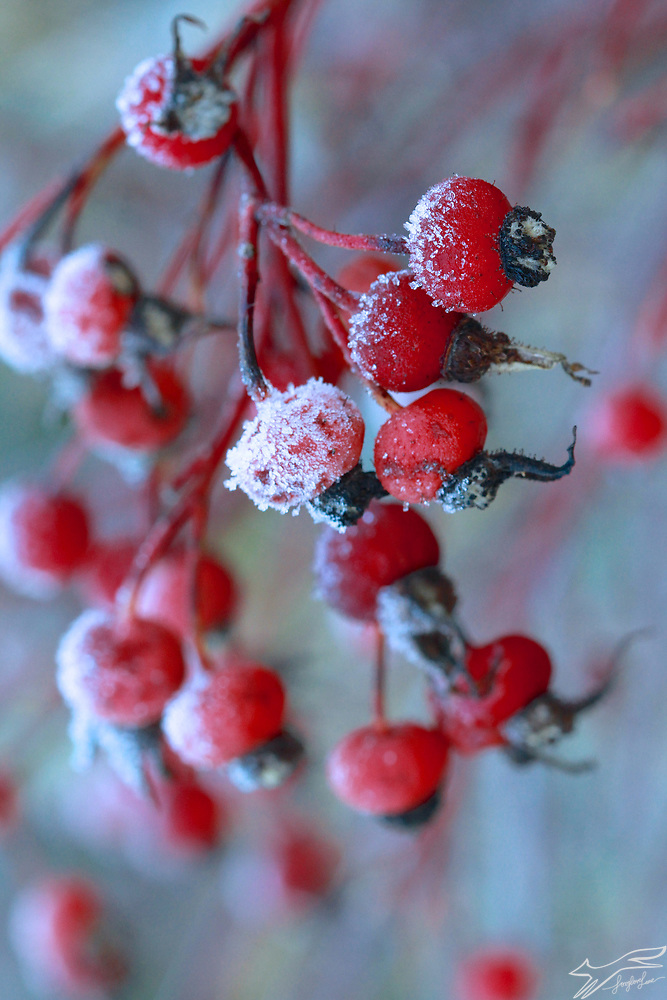 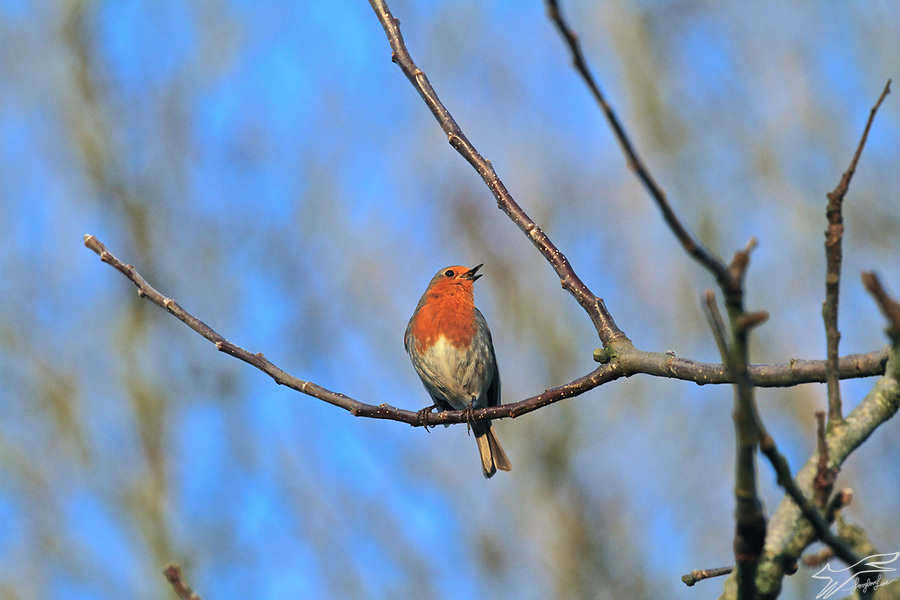 Suddenly it’s winter. A time I savour. The inclination is to hibernate, pause, mull over stuff. It’s a time for saying no. A time to rest. A time to enjoy early frosty mornings. Although in truth we get very few of them here in the South East of Ireland.

The changing seasons are a constant reminder of the cycles of life. While everything else is planning for dormancy, in winter the birds come back, come closer, and can be seen again amongst the bare branches. These days they are here early waiting for food.

The sun rises to the east and on these wonderful cold mornings, watery sunlight catches the top of the hill. Before the sun reaches us we bask in icy heaven. The frost doesn’t last long and even by the end of breakfast everything is thawing.

These winter days are a joy for any photographer. To capture some of that special morning light I try to put my subject in between me and the rising sun. Each icy dewdrop becomes a little rainbow. That’s my top tip for being out and about with your camera! Watch the light and see how it plays with moisture and ice. (You can see more from my frosty escapade here)

And because Paddy Kavanagh died 50 years ago this month,  I went back to read this beautiful poem which we learned in school. He takes us right there into his childhood experience of rural life and family at this time of the year.

A Christmas Childhood by Patrick Kavanagh

One side of the potato-pits was white with frost –
How wonderful that was, how wonderful!
And when we put our ears to the paling-post
The music that came out was magical.

The light between the ricks of hay and straw
Was a hole in Heaven’s gable. An apple tree
With its December-glinting fruit we saw –
O you, Eve, were the world that tempted me.

To eat the knowledge that grew in clay
And death the germ within it! Now and then
I can remember something of the gay
Garden that was childhood’s. Again.

The tracks of cattle to a drinking-place,
A green stone lying sideways in a ditch,
Or any common sight, the transfigured face
Of a beauty that the world did not touch.

My father played the melodion
Outside at our gate;
There were stars in the morning east
And they danced to his music.

Across the wild bogs his melodion called
To Lennons and Callans.
As I pulled on my trousers in a hurry
I knew some strange thing had happened.

Outside in the cow-house my mother
Made the music of milking;
The light of her stable-lamp was a star
And the frost of Bethlehem made it twinkle.

A water-hen screeched in the bog,
Mass-going feet
Crunched the wafer-ice on the pot-holes,
Somebody wistfully twisted the bellows wheel.

My child poet picked out the letters
On the grey stone,
In silver the wonder of a Christmas townland,
The winking glitter of a frosty dawn.

Cassiopeia was over
Cassidy’s hanging hill,
I looked and three whin bushes rode across
The horizon — the Three Wise Kings.

And old man passing said:
‘Can’t he make it talk –
The melodion.’ I hid in the doorway
And tightened the belt of my box-pleated coat.

I nicked six nicks on the door-post
With my penknife’s big blade –
there was a little one for cutting tobacco.
And I was six Christmases of age.

My father played the melodion,
My mother milked the cows,
And I had a prayer like a white rose pinned
On the Virgin Mary’s blouse.

PS Many of you who get the regular email update missed the video of the Exhibition Opening as for some techie reason it didn’t attach. You can see it here.